Church of the Immaculate Conception

The dedication of the parish church under the title of the Assumption of Our Lady is as old at least as 1234. Since the first half of the thirteenth century the benefice was attached to the Treasurer ship of St. Patrick’s Cathedral, Dublin. The site was on a hill east of the town where there is now a mixed burial ground in which stands a medieval high cross and a modern Protestant Church. The Catholic penal-day chapel was located at Broadleas, south-east of the town, until the building of the present church of the Immaculate Conception inside the town itself.

The present Catholic church was built in 1820,  shortly before Catholic Emancipation in 1829. Rev. Patrick Stafford PP who died on the 19th November 1845 is interred inside the Church and Canon Joseph Horgan (d. 1890), Canon Thomas Curran (d.1917), and Rev. Charles Ross Murphy (d. 1943) are interred in the Church Yard. A free standing bell tower was installed in c1850 and an Oratory was attached to the Church in 1865. The imposing entrance gate onto Church Street was added sometime around 1900. The last major remedial work to the Church took place from 1987-1990 but following a fire in the rear of the Church on 26th September 1990 another revamp was necessary in 1991. The Oratory has been used over the years as a CYMS Hall, Dance Hall, Cinema, Parish Hall and following major reconstruction ending in 2002 it is now the Resource Centre. A new Presbytery was built in 2001 beside the Resource Centre replacing an older Curate’s House. 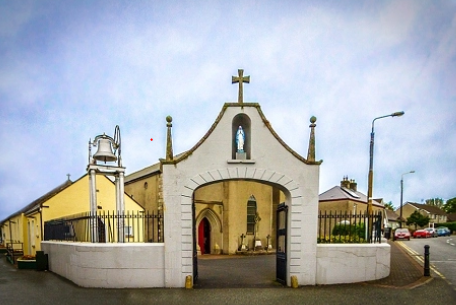 Hollywood, a  pleasantly remote village, surrounded by hills in west Wicklow, abounds in traditions. There is a claim that emigrants used its name for their settlement in California. A considerably older belief is that it was the birth place in the 535 of the man who became known in history as St. Kevin. After studying in the monastery of Tallagh, the young Kevin left his home with the aim of becoming an anchorite and made a journey along the valley of the Kings river and through the Wicklow gap and Glendasan to the lakeside at Glendalough. His sanctity attracted so many devotees that solitude became impossible and his retreat became a place of pilgrimage and worship.

Pilgrims came from far and wide to pray in Glendalough. The route taken by the many who visited Hollywood on the way is marked on the Ordinance Survey maps and also by the presence of a number of stone way markers – of which there may be many more buried. A church founded on a hillside at Hollywood in or before the 16th century was likely the spot used by the pilgrims, but became a protestant church after the Reformation. The Catholic community had to worship at mass rocks. Relaxation of the penal laws brought about the situation where anew church could be built. The donation of land by the landlord allowed the church to be built surrounded by a graveyard. The church was opened in 1791 but along with the rest of the village it was destroyed in the 1798 rebellion.

With government assistance it was rebuilt, a small rectangular building. Before long, with the increase in prosperity and population there was a need for a much larger building. This led to extensions on either side of church thus making a cruciform shape of the church which stands to this very day. This work was completed in 1830.

A scholarly  history of Hollywood was written by Brendan Corrigan in 2016 and provides details of the clergy who served St Kevin’S.

These few lines of the history of Hollywood church has been taken from an article written by Christopher Moriarty.